Example 1: Responsibility for the death of Jesus Christ:

One of the main forms of religious antisemitism is the concept of Jews being responsible for Christ’s death. This stems from some interpretations of a passage in the New Testament. Once Jesus was taken to be crucified, the Jewish crowd supposedly shouted for him to be crucified and for another prisoner to be released. When he died they shouted, “May his blood be on us and our children” Matthew 27:24–25. This was taken by many Christian theologians to mean that all Jews (and their descendants) accepted guilt, rather than just the particular Jews present. There are a number of other passages in the New Testament that are often interpreted in an antisemitic way, for example, when ‘The Synagogue of Satan’ is discussed in the Book of Revelation. These interpretations of the New Testament have led to discrimination against Jews by Christians throughout the millennia; they were treated as second class citizens and not allowed to do certain jobs. The Nazis are just the most extreme example of countless antisemitic governments who have stirred up hatred of Jews by saying they killed Jesus.

It is still causing controversy as shown in Widdecombe’s article below about Mel Gibson’s film The Passion of The Christ.

Example 2: Judas and 30 pieces of silver:

The phrase ‘thirty pieces of silver’ is a reference to the Biblical Judas (who like the other disciples, was Jewish) betraying Jesus to the authorities, for the sake of this payment, and thus being responsible for his death. Judas’s reported act leads into a stereotype of Jews betraying people for money, and being generally untrustworthy or corrupt.  It is possible that some who use this phrase these days do not realise that it has strongly antisemitic connotations, but these are well-established. Although the phrase is one of the oldest ones quoted in this Gallery, it seems to continue to flourish and has been increasingly commonly seen within parts of the left in recent years. An allied phrase is ‘Judas kiss’ since this is how Judas identified Jesus to the authorities wishing to arrest him.

We would argue that, even if the phrase is used in a way that is not intended to refer to Jewish people – it should always be avoided. This applies in our opinion to a number of other phrases which do not necessarily directly refer to Jews, but have antisemitic origins, such as ‘cultural Marxism’.

In the example below, it is implied that because then Deputy Leader Tom Watson received some funding for his office from Jewish donors, he was therefore a traitor to Labour. This was part of the ongoing factional dispute within Labour over the extent of antisemitism in the party.

The example below is fairly self-explanatory. Barry Sheerman is a Labour MP. The problem is not that he commented on perceived cronyism influencing Boris Johnson’s House of Lords appointments. The problem is that he picked out two Jewish people who had not even been appointed, and used the terms ‘silver shekels’ (shekels are of course current and historic Israeli currency) and ‘accepting 30 pieces of silver’. He also said “It never entered my head when I was making that comment that the two people I mentioned were Jewish”. We think this highly unlikely, although there is of course such a thing as unconscious racism.

Finally, below we see a shocking recent example of revival of mediaeval Christian antisemitism, part of Roman Catholic Easter celebrations in Pruchnik, Poland. This involved beating an effigy of Judas which had a big red nose, black hat and Orthodox-style ringlets. We explore these caricatures further in the Classical Antisemitism section.

The Blood Libel canard is one of the worst and oldest forms of Jew-hatred. Originally it was falsely claimed that the Jews murdered Christian children in order to consume their blood during religious rituals – notwithstanding that both murder and drinking of blood are considered sins in Judaism. During history, especially in mediaeval times, the unexplained disappearance of children was frequently followed by persecution of Jews. There are instances of such pogroms following blood libel accusations continuing up into the twentieth century in England, and the allegation is still very much alive in Middle Eastern antisemitism. The belief may also have resurfaced in the QAnon conspiracy theory with the belief that a global cabal (including prominent Jews) is involved in rituals of child sacrifice.

Warning: the following article was written by Harold Covington, a Nazi. 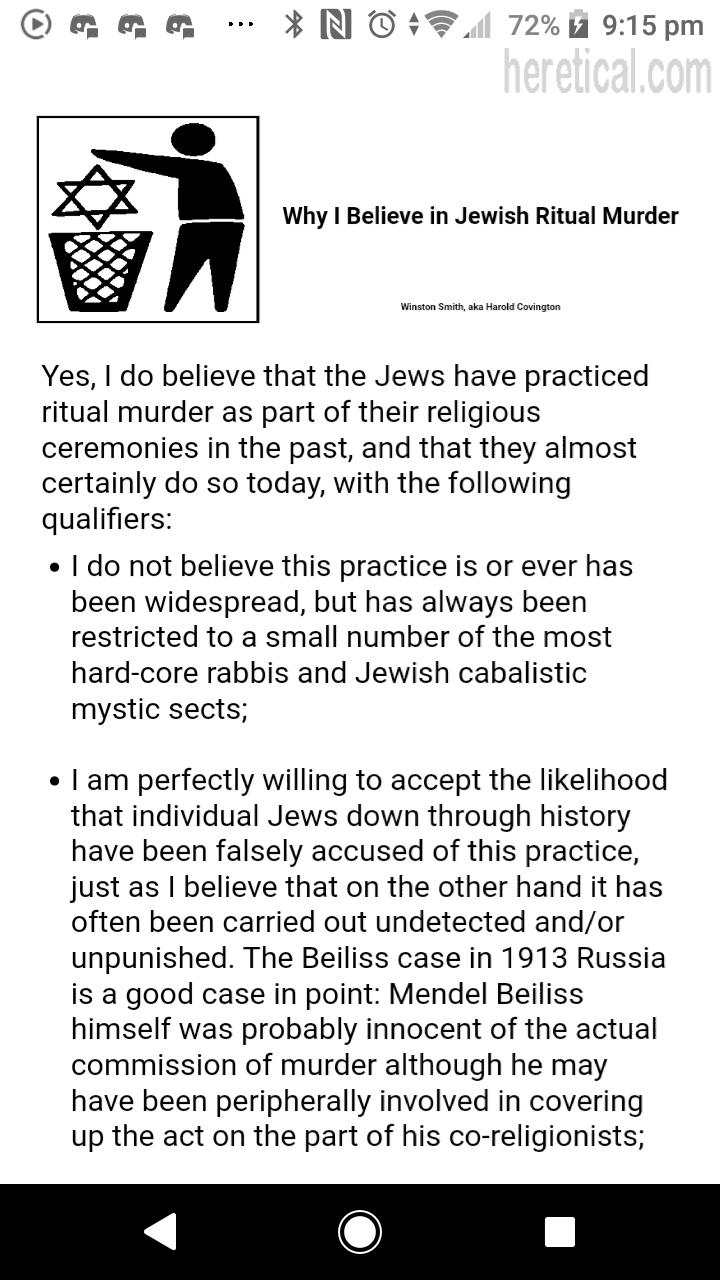 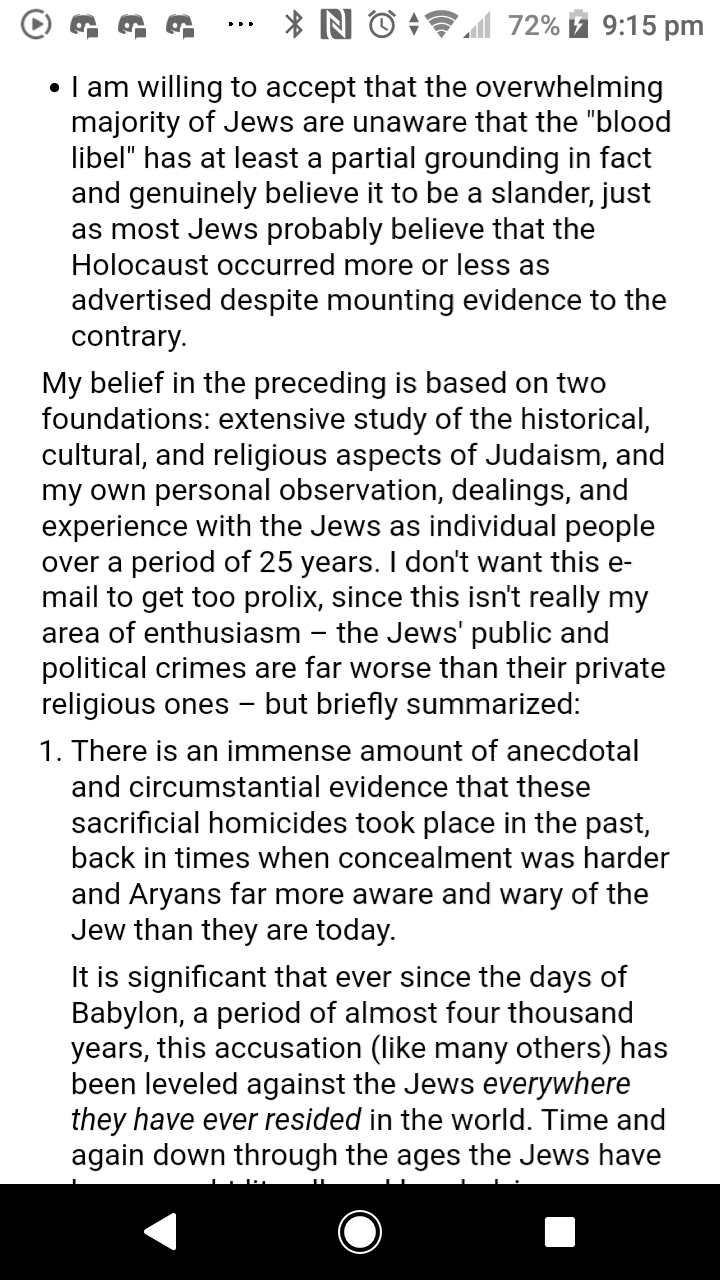 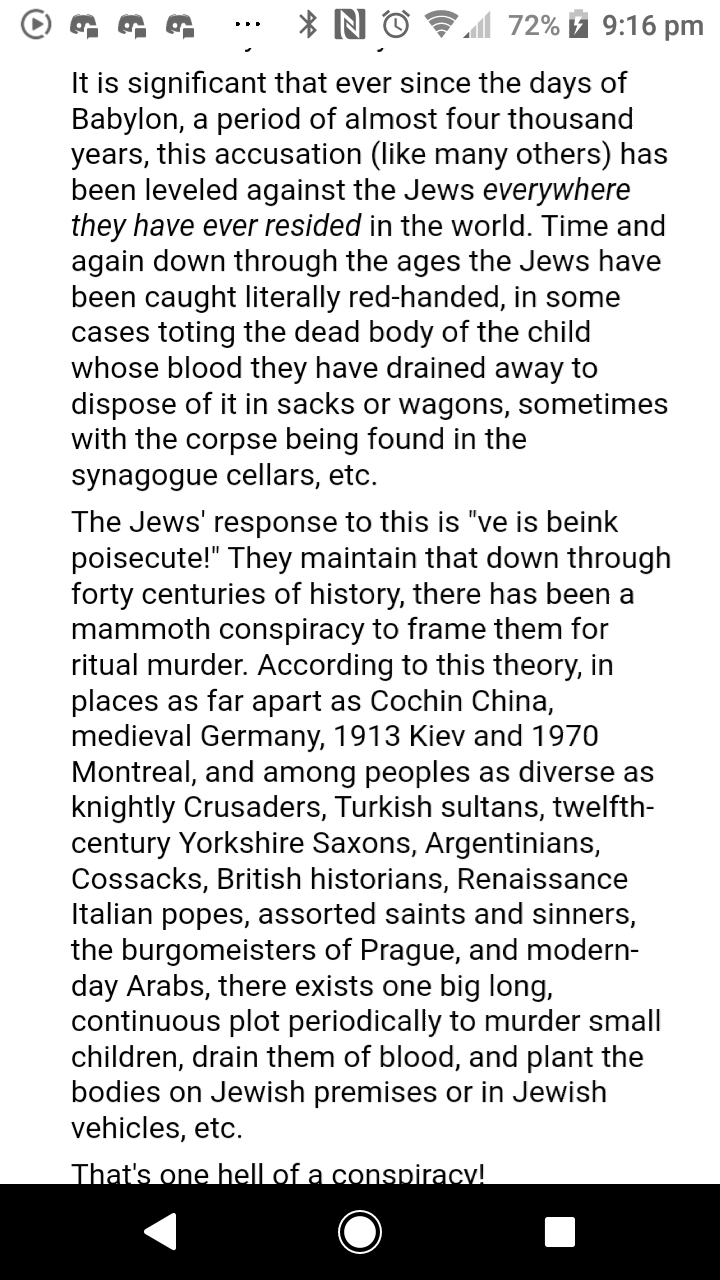 The following extract is from The Murder of William of Norwich : The origins of the blood libel in medieval Europe by E.M. Rose (2015, Oxford University Press, p. 2):

In 1150 Thomas of Monmouth, a Benedictine monk living in the cathedral priory in Norwich, East Anglia, began collecting notes for a narrative that he completed more than twenty years later, called the Life and Passion of William of Norwich.

Thomas’s text exists in a single contemporary manuscript now in the Cambridge University library. Brother Thomas, as we shall call him, reported that a few years earlier, before he had arrived in Norwich, a young apprentice leatherworker in the city, named William, had been persuaded to leave home with the promise of a job in the archdeacon’s household.

He was taken instead to the house of an eminent Jew where he remained for a few days. Thereafter at the direction of the homeowner, one of Norwich’s leading bankers, William was secretly held, subjected to ‘All the tortures of Christ’ and finally murdered. According to Thomas, after the Jews had crowned William with Thorns, tightened a knotted rope around his head and placed a gag in his mouth, they took the young man’s mutilated body out to the woods and hung it up. The body was eventually found under a tree outside the city walls.

Brother Thomas claimed that Jews performed this alleged ritual in imitation and in mockery of the Crucifixion and in mockery of the Christian religion and that William should therefore be regarded as a Saint. His account comprises two books, in which he details William’s life and suffering, and five further books, in which he recounts the miracles the saint was said to have performed after death.

The example below occurred as recently as 1928, and is described in Edward Berenson’s 2019 book The Accusation: Blood Libel in an American Town.

Here is another modern example of blood libel. In 2015 Stop the War published a poem by Heathcote Williams entitled Evil on the Streets. It recounts an incident in 2016 when a 13-year-old Palestinian boy, Ahmad Saleh Manasra, was run over in an illegal Israeli settlement in the West Bank, and was then screamed at, taunted and beaten by Jewish settlers. The incident, recorded on video, was truly shocking. Ahmad was later convicted of attempting, with his cousin (who was shot by the IDF), to murder two Israeli boys who had been seriously injured, just a little while before this incident. We must say that we see all the children in this tragic incident as victims of the conflict, and that we absolutely do not condone the settler behaviour. The important thing here, however, is the language Williams uses. In addition to using many Nazi and Holocaust comparisons in the poem, it suggests that cruelty is inherent to Jews, rather than a product of a particular modern conflict, when it describes the political situation in the following lines:

Moloch is the Biblical name of an ancient Canaanite god associated in Jewish rabbinical tradition with child sacrifice, through fire or war. Of course, in St Matthew’s Gospel the Jewish King Herod ordered the death of all male children under two year of age around Bethlehem, in an attempt to kill the infant Jesus (this story is now accepted to be a myth).

You can read the whole poem here: https://archive.is/ir6e8

Example 4: Distortion of Jewish scripture – for example, claiming that the Talmud says that paedophilia is acceptable:

Some of this is outright lies, and some of it is based on a misunderstanding of what the Talmud actually is. There are actually two Talmuds, the Palestinian and Babylonian; the Babylonian is considered authoritative as it continued to be edited for several hundred years. The Talmud is made up of the oral law or Mishnah, and Rabbinic stories/midrashim. The bulk of the Talmud is discussions and interpretations by rabbis of the oral law. All of the discussions would be recorded, even if someone said something outlandish or raised a satirical or devil’s advocate type point; even if ten people agreed and one person disagreed, the minority opinion would be left in. The Talmud is hard to understand unless you are a rabbi who has studied it for years, and there are over 30 volumes.

For example, take the discussion about the rape of a three-year-old highlighted in the website extract below. First-century rabbis weren’t really ‘woke’, but all the discussion is saying is that, if a child that age were abused, she would still be considered a virgin for the purposes of later marriage (deemed very important in those days), i.e. she would not be stigmatised for being a victim of abuse. It is an antisemitic interpretation to suggest that rabbis were saying that the abuse was permissible. Note also the suggestion that modern ‘elite globalists’ (a codeword for Jews) are deeply involved in pornography and global sex-slavery

There are similar false claims that the Talmud permits Jews to steal from non-Jews, calls non-Jews ‘cattle’, and so on. 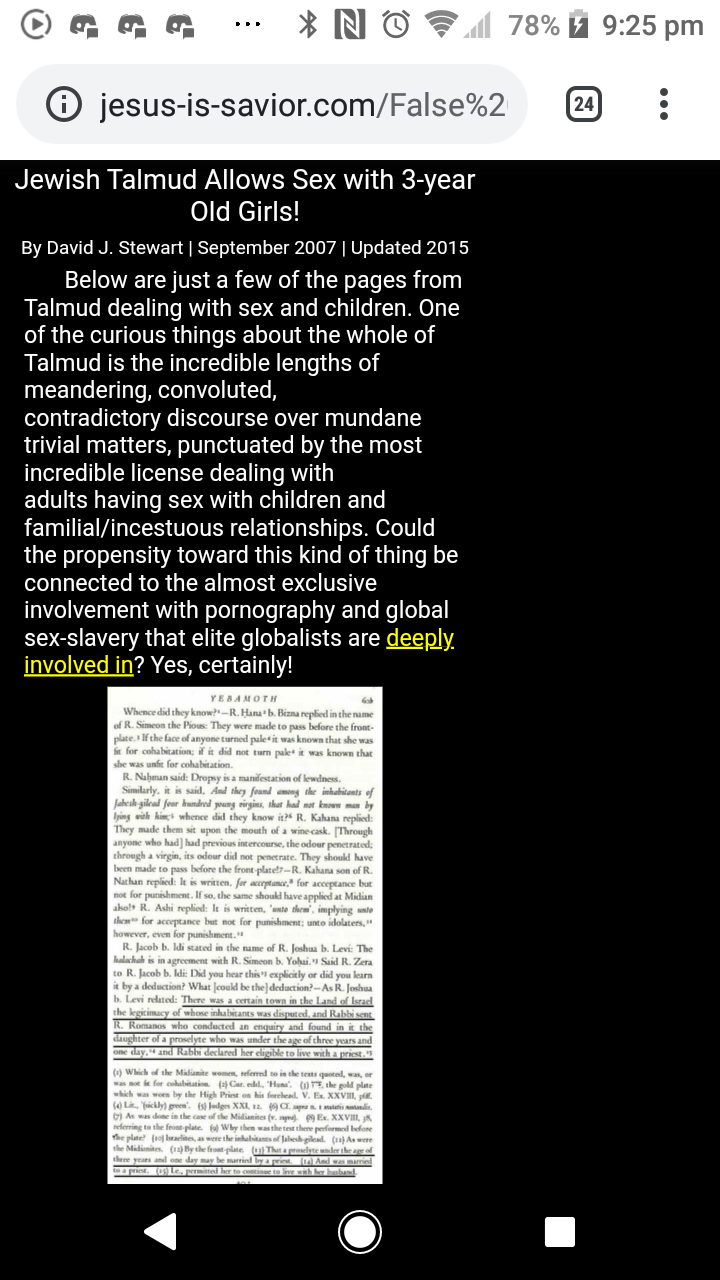 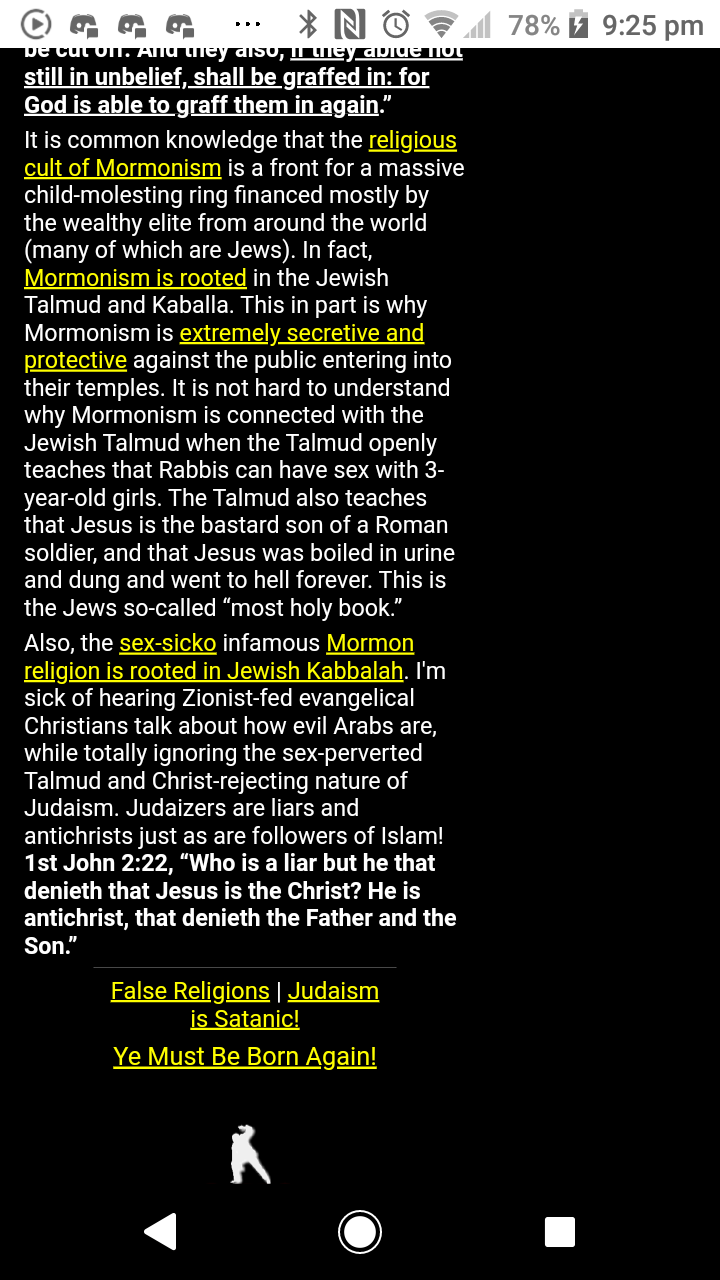 In this second example from 2020, Swedish neo-Nazis from the ‘Nordic Resistance Movement’ peddled blatantly antisemitic canards outside a synagogue, on Yom Kippur. The posters translate as follows, and clearly want to portray Jews as sexist, exceptionalist, but above all depraved child-abusers: ‘Blessed be you who has not made me a gentile who has not made me a woman and who has made me a Jew’; ‘Did you know? that all Jewish boys should be circumcised when they are eight days old and that then rabbis flock around the child to suck the blood from the penis’; and ‘According to the holiest scripture of the Jews, the Talmud allows Jews to have sex with children over the age of three’.

Host desecration was a medieval accusation that Jews were desecrating the Christian Communion ‘host’ (consecrated bread believed to be the body of Christ), or other sacred objects. Like blood libel, it led to many Jews being killed.

The image below depicts medieval Jews spearing and desecrating the consecrated host. This is nowadays not a common form of antisemitism and is certainly rare in the United Kingdom, but in parts of mainland Europe, it lives on. In 2008 a member of the far-right Jobbik party in Hungary claimed that host desecration was still happening (see example below) and in 2005 a pilgrimage based on host desecration accusations was restarted in Bavaria, but its origins were kept quiet. There is more information in this article https://www.publicmedievalist.com/deggendorf.

The example below is about Csanád Szegedi, formerly of the Hungarian right-wing party Jobbik. The objects mentioned are national symbols as well as, in the case of the Holy Right Hand, a religious relic. The article is of interest since Szegedi explicitly describes scapegoating Jews for populist political purposes. After discovering his own Jewish ancestry, he regretted his previous actions.

back to Gallery of Antisemitism index