Jews have been at the receiving end of conspiracy theories even before the modern concept of conspiracy theories. Possibly the oldest being deicide, ‘The Jews killed Jesus/God” which has been popular for 2000 years. We cover this further in our section on Christian antisemitism. Another old Christian conspiracy theory, this one conceived in medieval England, is the Blood Libel. This is the idea that Jews baked their Passover matza (bread) using the blood of Christian Children. Both of these have led directly to the death of countless Jews over the years.

In modern times, conspiracy theories abound. Starting with the Rothschilds, the idea that a group of Jews control the world. The Russians picked up on this idea and ran with it in the form of ‘The Protocols of the Elders of Zion‘. A forged work which claims to be the minutes of a group of Jews who are planning world dominance. The Protocols of the Elders of Zion is the foundational text of modern conspiracy theory based antisemitism which purports to reveal a Jewish conspiracy behind world events and governments, and was highly influential on the worldview of Hitler and the Nazis, as well as various regimes in the Middle East. This work is still very popular on social media and has fed into New World Order conspiracies, Illuminati and other related ideas. All global control conspiracies are connected in some way to antisemitic conspiracy theories.

More modern conspiracies use Israel or Zionists/ism as a switch for Jews, a concept we cover in our section on Jews, Israel and Zionism. These include the idea that Jews/Mossad/Israel were behind 9/11. Since 9/11 there have been rumours circulating on the internet that Jews were warned not to come into work that day. The fact that many Jews died in 9/11 doesn’t appear to be enough to quash these rumours.

Israel and Jews are frequently accused of having disproportionate power around the world. To some left-wing antisemites, Jews created and are responsible for the worst aspects of Capitalism (modern slavery etc). Whereas to right-wing antisemites, Jews invited and perpetrated communism and its worst violence. Likewise, Israel is said to control the USA, UK and other western countries. Therefore all middle-east wars are directed by Israel. Israel’s occupation of Palestine which includes barbarity is then turned into a holocaust with organ theft and other crimes alleged with no credible evidence.

Jews/Israel controlling the world or a very large part of it / geopolitical conspiracies. In this example, Jon Lansman is the Jewish figure behind a Zionist conspiracy to undermine UK politics in the mind of Asa Winstanley.

Here, Kim Cousins, a left wing ‘activist’ is recommending the works of David Icke. David Icke was a professional footballer who achieved fame as a football reporter, and then became for a time one of the Green Party’s chief spokespeople, including in their breakthrough 1984 European election campaign. He then became involved in conspiracist political activity, and although he is best-known in some quarters for his wacky theories about lizards, in fact he also relies on Nazi and pre-Nazi antisemitic propaganda, in the case of the former predominantly regurgitating the Nazis’ obsession with the Rothschild family, and in the latter using the notorious fake Protocols of the Learned Elders of Zion. He still gives talks to packed audiences in many locations and continues to have a worryingly large following. He has largely avoided using Holocaust denial in his stage appearances, but his website openly advertises Holocaust-denying material. His shows are liberally sprinkled with antisemitic references, including the “Illuminati” and the term “Rothschild-Zionist.

“The Zionists have tentacles everywhere.”

It is extremely common to see accusations that “Zionists” are actually controlling most of the major world powers, such as the USA, the UK and France.

In fact, Israel is dependent on patronage and support from these major powers, not the other way round, and does remotely have the resources necessary to accomplish such a feat. In reality the word “Zionists” once again means “Jews” here. People who spread this conspiracy theory will invariable point to wealthier and more influential members of the Jewish community (e.g. Janet Yellen and previous directors of the Federal Reserve, George Soros etc.) to justify this assertion.

Jews/Israel being responsible for world events/undesirable things e.g. ISIS, 9-11. For dedicated antisemites, it is important to associate Jews as strongly as possible with the most undesirable and hated world phenomena. In contemporary world affairs, this is most conveniently done from the antisemite’s point of view in claiming that Israel created ISIS or was in some way behind the Twin Towers atrocity. Sometimes it is claimed that Jews were forewarned about that attack so that they had no casualties. All this of course is false. For centuries antisemites have sought to blame Jews as much as possible for the worst atrocities or world phenomena – the Nazis’ propaganda is full of this – and it still goes on today, updated.

“Jewish control of the media”

This is increasingly common, and bears absolutely no relation to reality. None of the traditional press baron families is Jewish or has origins in Israel. Such is the enthusiasm for trying to demonstrate that the media is Jewish-owned that it is far from uncommon for antisemites to claim that Rupert Murdoch is Jewish (which he isn’t). It is yet another example of antisemites whipping up resentment against Jews in completely mendacious ways.

Perhaps it is not altogether surprising that, if Jews are to be accused of so much else, they should also be accused of subverting the will of the people. On the far right, this is often personified as being the responsibility of George Soros or other wealthy Jews. It feeds in to other anti-Semitic conspiracies about, for example, world domination, or betrayal of the country, and is related to them. An enormous amount of political discourse in recent years has been about Brexit, which is taking place as a result of  a decision in a referendum. Some supporters of Brexit were vocally frustrated that Parliament sought to scrutinise the relevant legislation, and looked for someone else to blame apart from the MPs themselves. They did not think to look far. Here Jacob Rees Mogg implies that Jews are responsible for frustrating the will of the people as expressed in the in-out referendum, and other related examples can certainly be found. Again this form of antisemitism has Nazi roots.

This is possibly one of the commonest current forms of antisemitism, though such propaganda is very old, and was a particular favourite of the Nazis. Jews in past centuries were forbidden to practise certain professions, but some Christians were forbidden to practise banking or moneylending. Therefore Jews were forced into this line of work. Some inevitably made a great deal of money out of it, and the Rothschilds, who branched out into several countries, did particularly well, eventually becoming probably the wealthiest of all Jewish families. As such they became symbolic for anti-Semites, including the Nazis, who directed an entire ‘historical’ film about them in the early 1940s.

Nowadays the Rothschilds, while still a very wealthy family by most standards, are much further down the wealth list, and yet the myths that they control the whole banking system (including, apparently, the Bank of England and, even more frequently stated, the Federal Reserve) persist.

Even fully-nationalised central banks are amazingly frequently stated to be controlled by the Rothschilds, who in the eyes of anti-Semites still possess mythical power. Some anti-Semites however have noticed that the fact that the Rothschild myths have increasingly been successfully exploded makes it necessary to turn their fire on to other people, and this often means George Soros, who is also extremely wealthy and influential and happens to be Jewish. Of course the Rothschild family are not beyond criticism, but it is very rare to come across a social media meme featuring a member of that family which is not anti-Semitic in its intent. 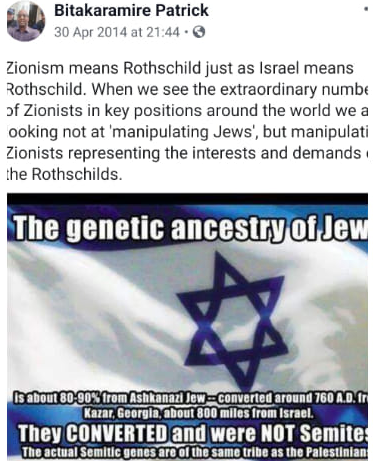 https://www.facebook.com/socialistsagainstantisemitism/photos/pcb.494867218030941/494867104697619/?type=3&theater
This again is a very common and old form of antisemitism. The infamous forgery The Protocols of the Learned Elders of Zion talks of a Jewish conspiracy to dominate the world. There are only about 14 million Jews worldwide and it is impossible for members of such a small ethnic group to exert dominance in the whole world. Fear and hatred of Jews is behind such attempts to persuade people that such a conspiracy exists; of course it is all complete fiction. Whenever you see such a “theory”, it is Jew-hatred dressed up as a theory. The Protocols are still disseminated today by such as David Icke.

Using code words to talk about the Jews – e.g the Illuminati, George Soros, the Rothschilds

This is extremely common both on the ultra-right and on the conspiracist left. Many antisemites believe, probably correctly, that they will gain greater acceptance and popularity if they avoid directly using the words Jew(s) or Jewish. Though often such people then turn to the word Zionist or another phrasing, often more complex codewords are used as shown. Sometimes Jews are referred to solely as ‘them’.

With conspiracy theories about the Rothschilds increasingly becoming discredited, George Soros is increasingly invoked instead, as a modern-day very wealthy and it seems influential man of Jewish origins. The Illuminati (an alleged secret group of people, all or almost all Jewish, who are supposed to be in control of almost everything) conspiracy theory has been around a long time and is beloved of David Icke (who also constantly talks about the Rothschilds, often in the construct “Rothschild-Zionist”). Again it’s an attempt to attack the Jews as a whole by alleging that Jews are in control of large parts of world society. Soros is influential but again as with the Rothschilds he is often described as controlling things that he does not. All these code words are routinely used by anti-Semites.

There continue to be concerted efforts by antisemites to claim that in fact the real Israelites or Jews aren’t really Jews at all, but are people of long-ago White Christian (or other) heritage who converted to Judaism (sometimes they are even the same antisemites who maintain that Jewish people are “rootless cosmopolitans” and indulge in “othering” them, no doubt). In order to cast doubt on Jews being a people, it is necessary to demonstrate that they do not have a genuine heritage of their own (see other examples), and have instead appropriated and pilfered things belonging to other cultures. This even includes, at times, the words antisemitism, anti-Semite and anti-Semitic – for what better way to attack the opponents of antisemitism, be they Jewish or non-Jewish, than to claim that the very term antisemitism wasn’t even genuinely applied? 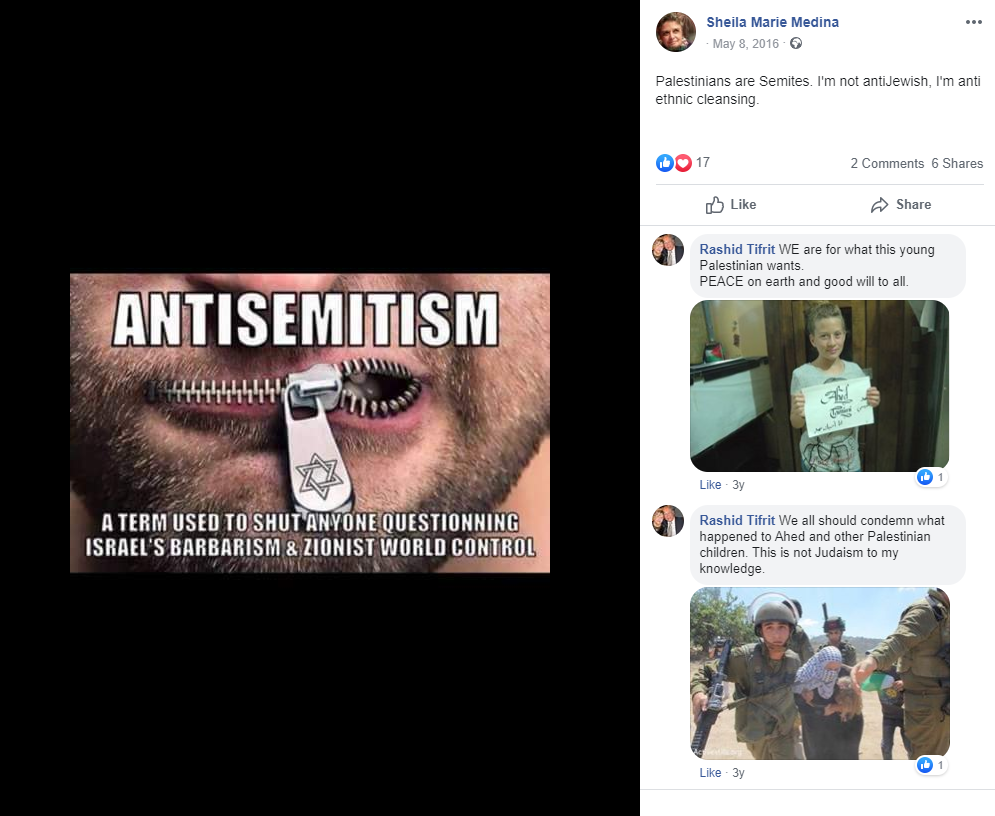