The issues of the relationship between Jews, Israel and Zionism is extremely complex. The Jewish people originally come from Israel and have for 2000 years (since they were progressively exiled) dreamed, prayed and wished for a return to their homeland on a daily basis. Jews formally pray three times a day and in each service there is the remembrance and pleas to return to Jerusalem, Zion, the Temple etc. This also occurs in the prayer said after eating a meal, several times a day.

Despite exile from self-rule, Jews have lived in the historic holy land continuously. They were the majority there until the 4th Century when Christianity became the official religion of the Roman Empire. This sparked lot of anti-Jewish persecution which led to many Jews leaving. Some returned in the 7th Century, when Muslims conquered Jerusalem and Caliph Omar allowed them to live in Jerusalem for the first time in centuries.

Jews tended to fair better under Muslim rule who had a place for Jews in their Ummah (community), although often as second class citizens paying the Jizyah tax. The medieval crusades where bad news for the Jews (and Muslims). In the 16th Century, mystics in northern Israel (Tsfat), many of whom had arrived from Spain after the expulsion in 1492, invented Kaballah. Kaballah is a mystical form of Judaism which had a massive impact on world Jewry and does to this day. There was a big fallout between the Rabbi’s in Jerusalem and Tsfat at this time and Jews which reflects the vibrancy of the communities. Jews had a continuous presence in other parts of the holy land including Hebron which is now a major flashpoint in the Israel/Palestine conflict.

In the 17th Century, a ‘false messiah’ called Shabbatai Tzvi swept across Europe and the Ottomon Empire. The diarist Gluckel of Hameln wrote that her Uncle had packed his bags to return to Jerusalem, waiting for this messiah to take them. For many Jews in Europe, the return to Israel was a palpable event that they waited for in their lifetimes.

This short history is to demonstrate the relationship Jews have always had with the land of Israel, even before the modern political Zionist movement was born in the later part of the 19th Century.

It’s not surprising that according to polling, over 90% of British Jews have a strong attachment to Israel (with over 60% identifying as Zionists).

The term zionism has had many meanings over the years. One of the pre-state Zionists was Martin Buber who wanted one-state with equal rights for all its inhabitants. It’s fair to say that the current definition, a Jewish state in the land of Israel, was not always so clear. To most Jews Zionism now simply means accepting the existence of the State of Israel. Many people who identify as Anti-Zionists are actually anti-occupation of the West Bank and Gaza. The lack of common understanding of the word Zionism has led to much division and hostility.

Although many Jews do regard themselves as Zionists, and do not see the words Zionist or Zionism as any form of insult, Zionism is seen by many people, including a significant minority of Jews, as a controversial political vision. Because it is the accepted view even of many, perhaps even most Zionists and certainly including us, that there is a clear distinction between anti-Zionism and antisemitism, it is very common indeed for those intending to make an antisemitic statement to dress it up as anti-Zionism, as shown in these examples.

Example 2: Blaming Jews for the misdeeds of Israel

No member of an ethnic minority should be expected, as a precondition to any non-hostile conversation, to dissociate themselves from acts perpetrated by a government which has a majority of members of the same ethnic group. For example, it can rightly be regarded as racist if someone of Black African ethnicity were forced to denounce the past atrocities of Uganda’s Idi Amin. It is similarly unacceptable for Jews to be forced to denounce acts perpetrated by Israel. Conflating the Israeli government with Jewish people as a whole is a racist act.

Example 3 (was 17): Making a false equivalence between Zionism (the free will of the Jewish people to establish and maintain a Jewish homeland) and e.g. the Nazis’ forcible expulsion of Jews.

As notoriously done by Ken Livingstone   https://www.timesofisrael.com/top-historians-take-down-livingstons-claim-that-hitler-supported-zionism/    : this has become more and more of an issue in more recent years. Zionism is the belief in a Jewish homeland but Nazi ideology was, and remains, of the opinion that the Jews are a menace and should be disposed of, not merely sent forcibly to other countries. A Zionist is a person who supports the establishment and continued existence of the state of Israel, in modern terms, and believes that this is the free will of the majority of the Jewish people. The statement that “Hitler supported Zionism” which was made by Livingstone is fundamentally incorrect and rests upon a complete misunderstanding of what Zionism is.

Supporting Hamas, Hezbollah and other organizations which believing in killing Jews

This is a more direct form of antisemitism, as Hamas are explicitly anti-Semitic and their spokespeople have often said that they do not envisage any Jews living in Palestine in the future. The SWP’s line, and that of other organisations and people that defend Hamas, is that the Palestinians are in an impossible situation and that, basically, any form of resistance to occupation, even that which takes an explicitly racist form, is defensible and indeed worthy of support. As socialists who are desperate to see justice for the Palestinian people, we cannot possibly agree with this analysis or even begin to do so.

Most Israelis today were born in Israel and the answer to the oppression of Palestinians cannot possibly be the extermination or forcible deportation of the majority of a legally-constituted country’s population. To support Hamas or Hezbollah means literally to support the death or deportation of millions of people. It is of course perfectly possible, indeed highly desirable, to support the aspirations of the Palestinian people to have a fully independent and viable state without advocating the mass-killing of the population of a country.  However, the same cannot necessarily be applied to all Palestinians living in Gaza where Hamas are currently running the government. 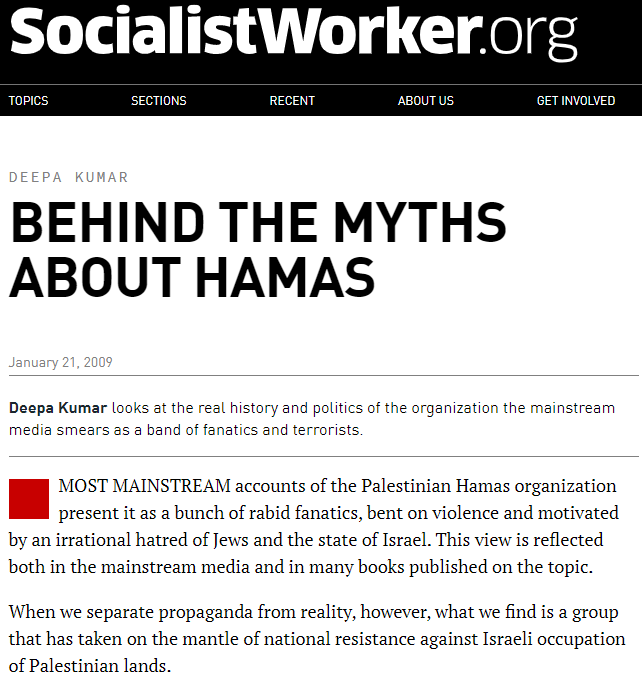 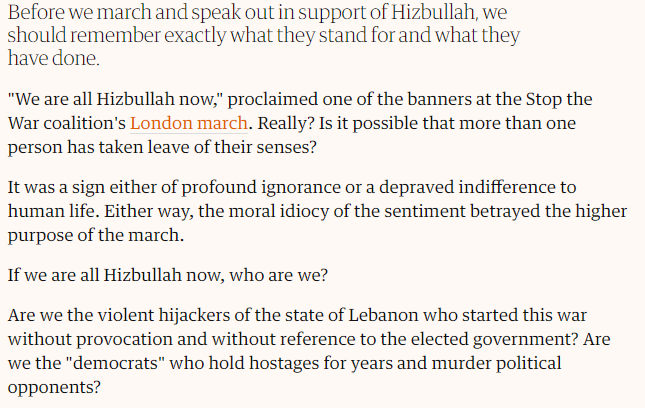 Making a false equivalence between Zionism (the free will of the Jewish people to establish and maintain a Jewish homeland) and e.g. the Nazis’ forcible expulsion of Jews

This was notoriously done by Ken Livingstone   https://www.timesofisrael.com/top-historians-take-down-livingstons-claim-that-hitler-supported-zionism/    and this has become more and more of an issue in more recent years. Zionism is the belief in a Jewish homeland but Nazi ideology was, and remains, of the opinion that the Jews are a menace and should be disposed of, not merely sent forcibly to other countries. A Zionist is a person who supports the establishment and continued existence of the state of Israel, in modern terms, and believes that this is the free will of the majority of the Jewish people. The statement that “Hitler supported Zionism” which was made by Livingstone is fundamentally incorrect and rests upon a complete misunderstanding of what Zionism is.

If someone raises antisemitism, accusing them of having an agenda or of it really being about Israel   : again, this one is fairly common nowadays. An antisemite will often want to fight back against accusations that they are antisemitic, and one way is to attempt to discredit the accuser. If they can persuade someone that the allegations are spurious by deflecting, that is one way that that can be achieved. This has been particularly common in the context of Labour Party politics in recent years. A correct response in the face of accusations of antisemitism would be to reflect if there is something in the allegations, but an antisemite will very often want to fight back, and this is one tactic that is frequently used. Of course some such allegations actually are spurious, but often this is the answer when they are anything but. 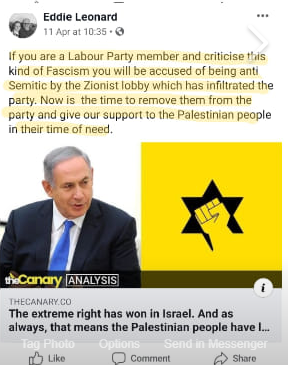 For example, a rabbi says something about it being OK to kill Arabs (though it may well be that the comments are distorted anyway) and this is then held to represent Jews as a whole.

back to Gallery of Antisemitism index