This page will describe some of the classic and traditional stereotypes of Jews, including stereotypes around money, cultural and religious stereotypes. This sort of stereotyping may seem harmless in itself and can appear in a jocular fashion, but all too often it is expanded into grand conspiracy theories such as the Jews controlling almost the whole of world banking. While it formed part of the antisemitism of the Nazi era, it originated prior to Hitler’s rise and still persists today. If an anti-Semite can get people to believe in these stereotypes, then it may help such a person in their quest to undermine Jews’ ability to live in peace, harmony and prosperity.

The Nazis softened up the German people with propaganda using such stereotypes and then were able to amplify this into a much more threatening and ultimately murderous form of antisemitism. It is very important that attempts to stereotype Jews in a malign fashion are resisted, even if some of them appear relatively harmless at first sight.

This tweet shows a Hamas leader comparing Trump to a Jew because of the Jews’ alleged love of money. 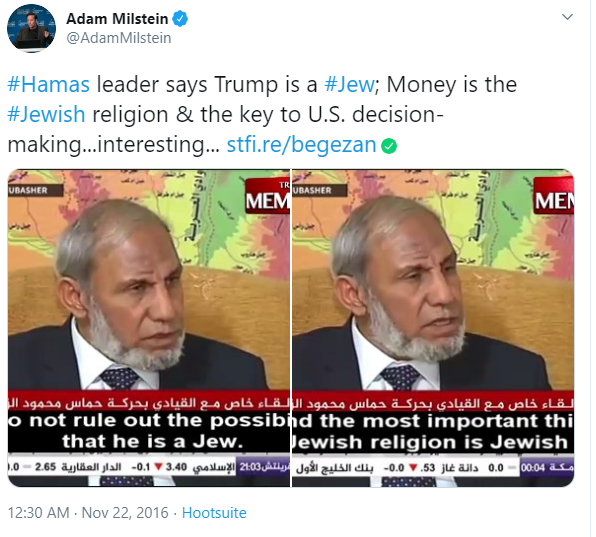 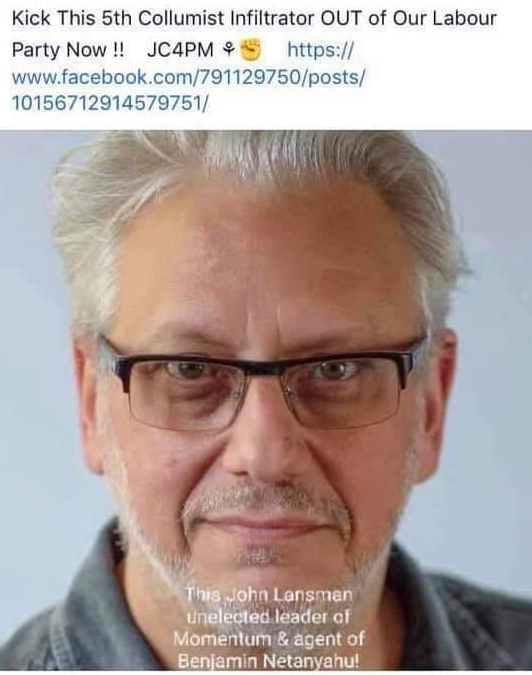 The use of the term Fifth Column implies treachery, or a deliberate infiltration or subversion of a process, and is a very old stereotype surrounding Jews, implying that they are more loyal to each other and their own agenda than the wider community. In the above illustration, for example, it is implied that Jon (the correct spelling) Lansman is not a true bona fide member of the Labour Party, or of its organised left, despite his very long history of activity in it (Lansman was one of the major organisers of Tony Benn’s narrowly unsuccessful bid for the Labour Party’s Deputy Leadership in 1981), but is some sort of Jewish infiltrator, not there to help achieve the socialist society he actually believes in, but there to do someone else’s bidding. There is no doubt that he has been singled out simply because he is Jewish. A number of these conspiratorial forms of antisemitism are linked but not quite the same, and this bears a clear similarity to other forms we have illustrated. It is of course an attempt to blame Jews when things go wrong. 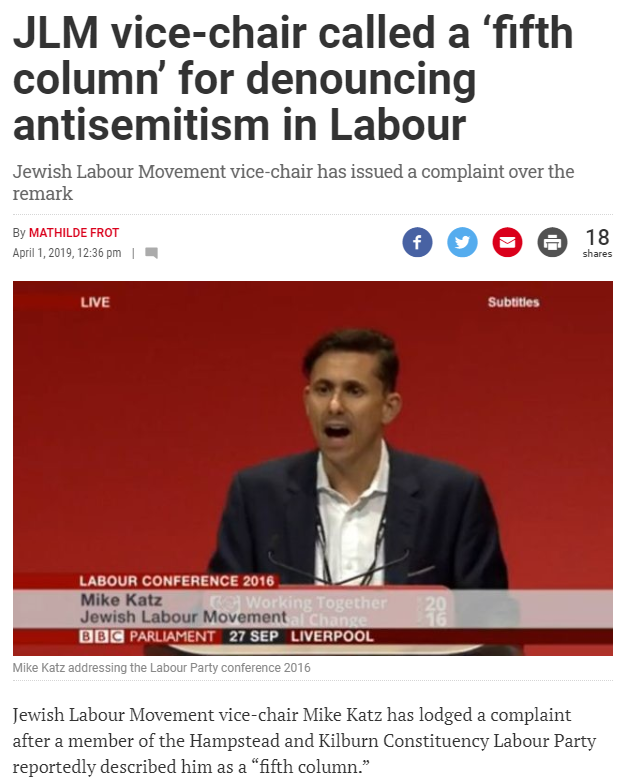 Claiming that Jews are after special status

https://antisemitism.uk/conservative-mp-crispin-blunt-suggests-british-jews-demand-special-status-and-reportedly-says-grants-for-jewish-security-are-a-waste-of-money/?fbclid=IwAR3qhWdUaMXTsIcPxAmPY2TKsfPC3GmicJSdzKCSbFVmlRTq1y9gyh3FVYU : This was recently done by Crispin Blunt and is straightforward racist discourse. It is a generalisation without even the remotest foundation, and grossly offensive. Jews are an ethnic group and want no more than to be treated as ethnic groups are. This accusation sometimes takes on a more biblical slant, with people accusing the Jews of behaving as if they are the chosen people which is a related accusation. It is concerning that Blunt has not even, apparently, received a warning for this highly antisemitic and unfounded assertion. 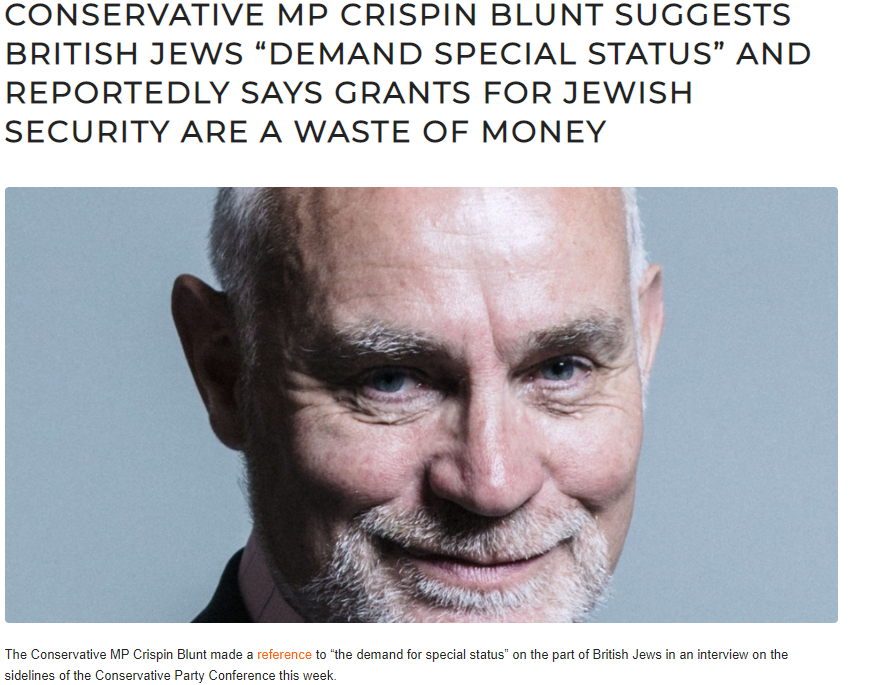 Blaming Israel, and Jews themselves, for the rise in antisemitism, rather than anti-Semites

https://www.facebook.com/socialistsagainstantisemitism/photos/pcb.287383308779334/287378912113107/?type=3&theater  This is almost straight out of the Nazi playbook. The Nazis justified their murderous antisemitism by blaming as much as they could think of on the Jews, including different ways of organizing society (they specialised in painting “Bolshevism” as Jewish), and so much else. More modern Nazis have also blamed multiculturalism on the Jews. For the antisemite, what better than to blame the Jews themselves for antisemitism – even for some Nazis the Holocaust itself? The Jews have been scapegoats for centuries, even millenia, and it is not, sadly, all that unusual for them to be blamed for antisemitism itself. It is extremely disappointing that anyone describing themselves as a socialist should join in this chorus.

This form of antisemitism goes to the heart of Nazi ideology. To the Nazis, the Jews were responsible for all of the chief evils of the world. Communism was to them the embodiment of everything they hated, but in their attempts to gain support from past Socialist and Communist voters, they also attacked international capitalism in their propaganda (which did not of course prevent them from working extremely closely with leading capitalists). Both these opposites were somehow the fault of the Jews. Antisemites have often, personified the responsibility for capitalism with the Rothschilds, but other prominent Jews including George Soros are often invoked too. It substitutes scapegoating for any socialist analysis of capitalism. This propaganda, as with many forms of antisemitism, has mostly Nazi origins. 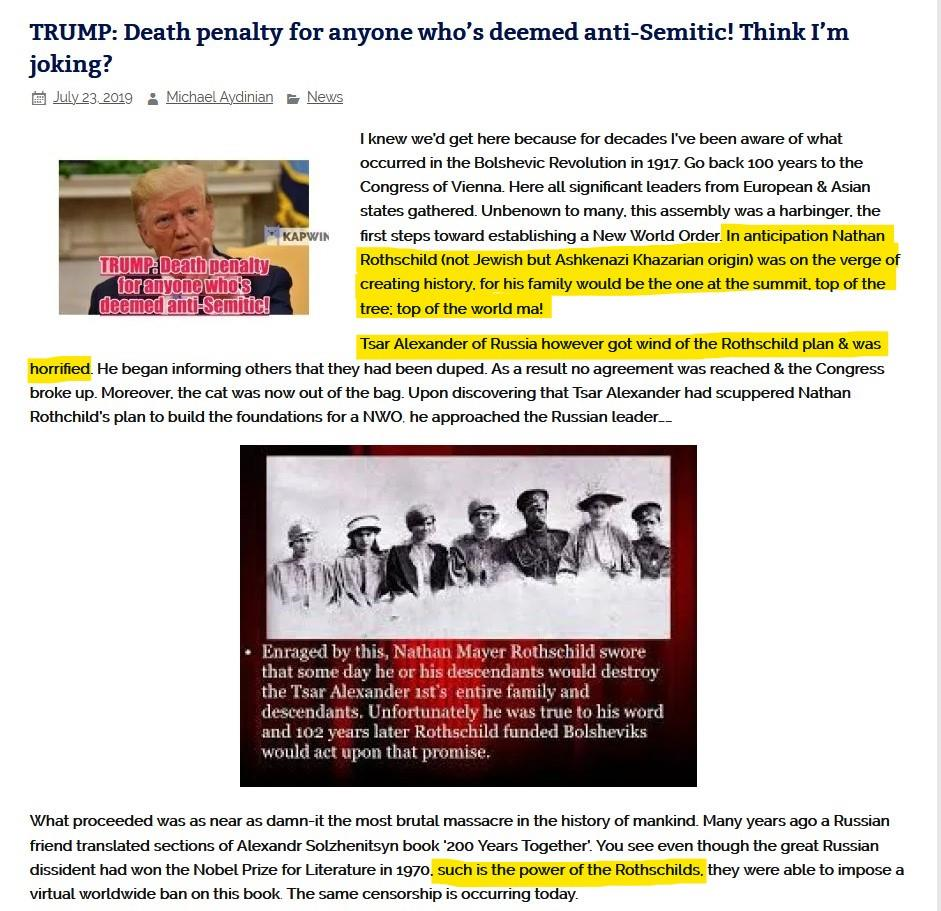 Accusing Jews who raise antisemitism of being antisemitic, for spurious reasons

This happens remarkably often. Sometimes it is used directly at the accuser by the accused, sometimes it is used by a third party. It has been said that the best form of defence is attack, and at times if someone does not have a convincing defence they will lash out in this sort of manner instead. After all, what better way of absolving oneself of antisemitism but to portray your antagonist as an antisemite instead? Sometimes the antisemite elaborates a little further with a formulation such as “this harms the fight against genuine antisemitism”. Usually it’s extremely unconvincing and desperate-seeming, but it can at times deter some doubters from calling an antisemite an antisemite.  https://www.facebook.com/photo.php?fbid=10158881967188219&set=gm.555594798348133&type=3&theater&ifg=1

One SAAS member gave the example of bullies constantly asking the only Jewish boy in one person’s year whether he was circumcised, or using pig metaphors to add a particular sting to an insult towards a Jewish person. Most people would recognise this as a form of antisemitism, and a fairly basic one at that. Sometimes this can even lapse into illegality, as when a man deliberately hung pig parts on his washing line deliberately to rile his Jewish next-door neighbour. It’s a deliberate attempt to cause maximum offence and hurt, whereas some of the other forms of antisemitism illustrated here are sometimes a case of lack of awareness rather than a deliberate attempt to hurt.  https://www.youtube.com/watch?v=Ipim2fsJ26U&feature=youtu.be&fbclid=IwAR2Ilmqk0SsE1IW7gPrwaRa_W5D1aavhHp6wD3_yY_kdaF1YNbUpTTd5e5A

Classic Nazi white supremacy –  Dehumanisation of Jewish people, using Nazi symbols or motifs to taunt Jews etc., such as daubing things belonging to Jewish people, or monuments, with swastikas. This one possibly doesn’t need illustrations and surely not explanations. But decided to include this one :  https://forward.com/fast-forward/434498/swastika-turtles-washington-state-park/

Responding unsympathetically to concerns about antisemitism by saying that the complainant should report it to the police if they are genuine when, of course, most antisemitism is not illegal. ; – this is another instance of people apparently regarding antisemitism as a lesser form of racism. Of course many forms of racism don’t actually break the law in this country or many countries – even Holocaust denial is not per se illegal in this country although it is in a small number e.g. Germany. To make illegality the sole arbiter of what is racist is racist itself, and in the case shown here antisemitic. 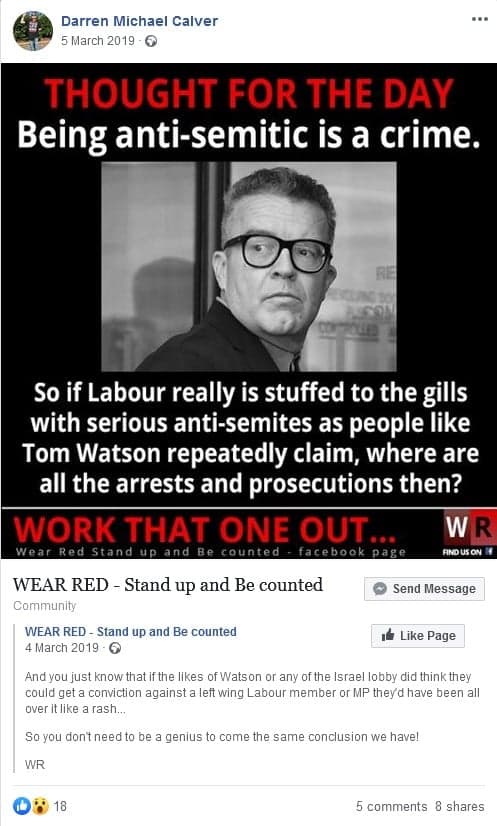 Allegation of dual loyalty (also applied to Catholics, Muslims, and members of many other groups)

For hundreds of years, Jews have been “othered”, treated as aliens even in countries where they were born and in many cases had longstanding roots. Jews have been expelled over the centuries from many countries including England in 1290, and been subjected to harassment or death because they were seen as aliens to be feared and hated. To accuse Jews of dual loyalty is less physically deadly but it’s part of the same essential mindset, one that regards Jews as not really belonging to the country where they live, or indeed more often than not were born.