Gallery of Antisemitism – Other

Types of antisemitism that do not fit in another category

Denying that Jews are an ethnic group & claiming that they are just a religion like Jainism, Hinduism, Christianity etc – note the comments of Nick Taylor here : https://www.facebook.com/janine.booth1/posts/3238755s189498843?comment_id=3239113626129666&notif_id=1573230910919210&notif_t=feed_comment_reply . For an antisemite, it is often a major goal to try to deny that being Jewish is being part of an ethnicity. This, they believe, will help them deny charges of being racist – because if they are only against a particular religion, they think that they will not be seen as racist. In fact Jews are a people heavily linked by ethnicity, and an ancient people too. In any case Islamophobia is a form of racism, as it’s used to attack people of a variety of ethnic minorities under the guise of criticism of a particular religion. Denial that a particular ethnicity even exists is in many ways one of the most fundamental forms of racism; it seeks to erase the Jewish people as a people.

Separation of Jews by non-Jews into “real” and ‘”not real” groups (eg Neturei Karta shitposting).

This form of antisemitism is one that is more often found on what is sometimes described as the “crank” left than amongst neo-Nazis. Those elements on that part of the left are not often willing to damn all Jewish people openly. Instead, they claim to be not antisemitic, but merely anti-Zionist. This can lead them in turn to seek out not just Jewish “political” anti-Zionists, such as Tony Greenstein and JVL, but also the tiny minority element of the ultra-Orthodox Jewish community that rejects Israel on the grounds that, since the Messiah has not yet come, the foundation of the state of Israel is in effect a blasphemy.

Although anti-Zionist attitudes are to be found in some larger ultra-Orthodox groups, the tiny Neturei Karta, which has only about 1500 members worldwide, is particularly fundamentalist on this question, so much so that they enthusiastically join pro-Palestinian demonstrations (though they have also demonstrated in favour of Hungarian fascist party Jobbik), even those which have extremist elements represented on them.

For some antisemitic people who identify with the left, NK’s outlook fits in with their regional or world view, and in some cases they will then claim that NK are the true Jews, and that all those who do not regard Israel’s existence as a blasphemy or essential criminal act are, in fact, fake Jews. Such people also tend to exaggerate NK’s size hugely, or try to make out that they are representative of opinion within the ultra-Orthodox Jewish community as a whole. In fact, they are a tiny minority even within the ultra-Orthodox, let alone within the entire Jewish community. Their views on matters such as women’s rights and tendency towards Holocaust revisionism makes even some extreme anti-Zionists wary of associating with them. Any attempt by non-Jews to portray NK as the real Jews, and the rest of the Jewish community as fake, is another very strong example of antisemitism in practice. 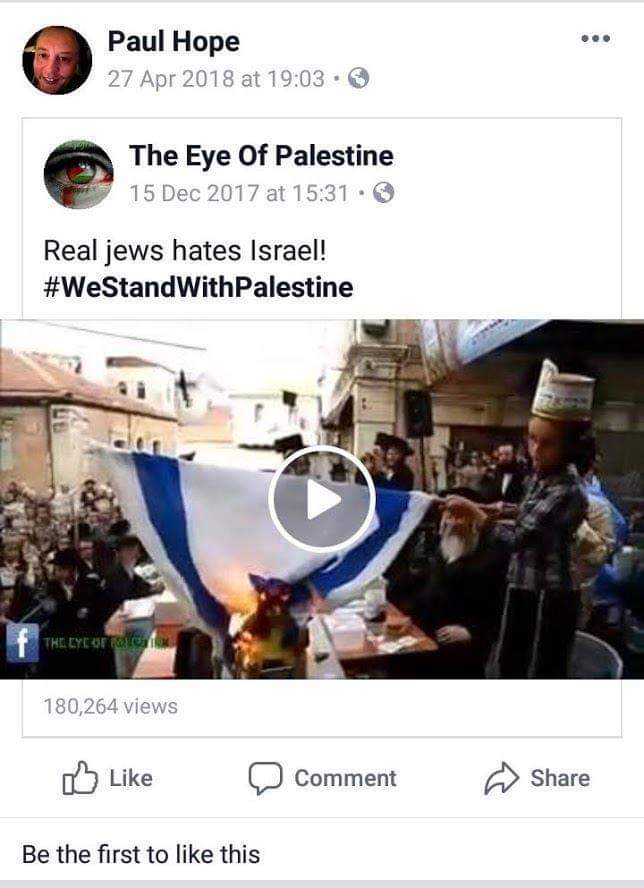 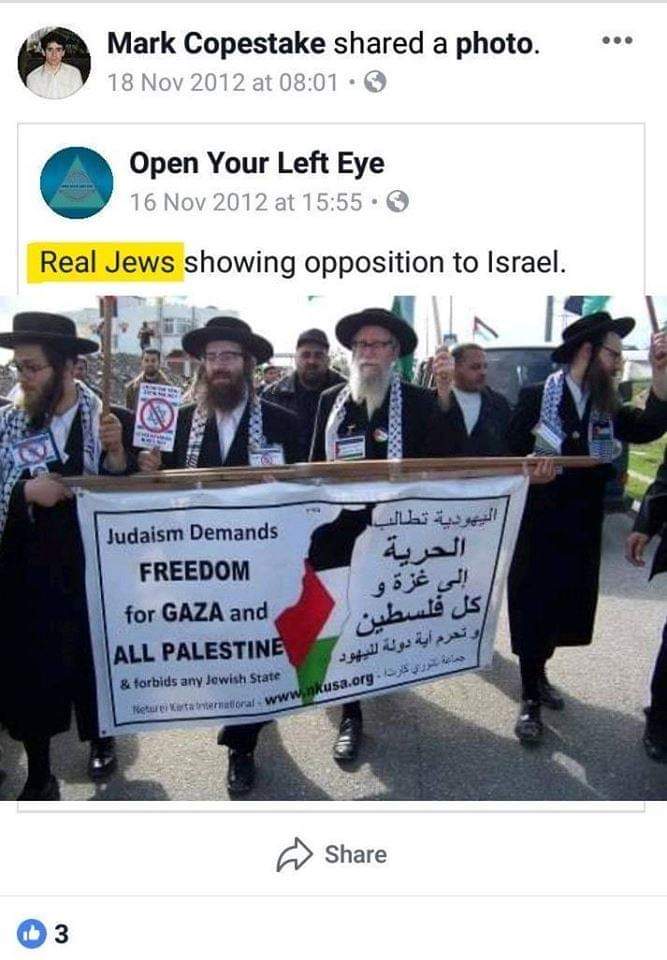 The Khazars were a historical kingdom near modern day Mongolia whose rulers and a large part of the population converted to Judaism; this theory was originally propounded by Arthur Koestler in his book “the Thirteenth Tribe”. It is possible that some Jews do partly have this heritage; of course there are Jews coming from that region of the world where the Khazars originated too, and researching/discussing this period isn’t antisemitic in itself. However, the Khazar theory is used to argue that the Jews are lying about who they say they are, such as saying that they aren’t the true members of the tribes of Israel (as if a huge number of Jews aren’t converts, or descended from converts) and have attained their religious status by deception. It often features in conspiracy theories, especially more religious-based and esoteric ones. This is related to the view that the Jews aren’t God’s chosen people because they aren’t members of the “tribes of Israel”. 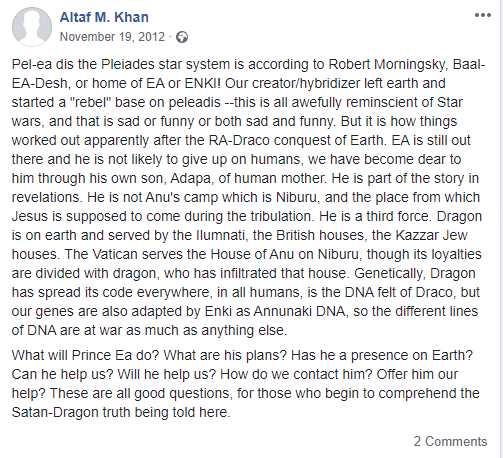 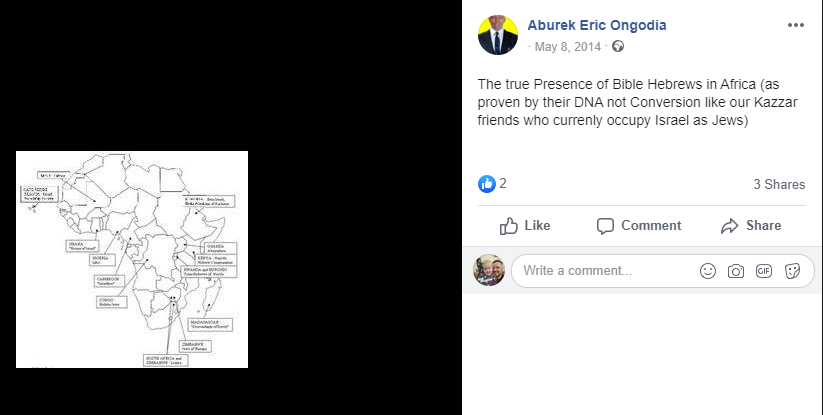 This could include claiming that  antisemitism is not a significant problem, or doesn’t exist at all, in society or in the Labour Party.   https://skwawkbox.org/2019/02/12/labours-antisemitism-data-release-exposes-media-narrative/

This is a form of antisemitism which is far more common on the left than the fascist right. Of course, it is not in the same class as the more murderous or explicitly antisemitic manifestations of Nazi ideology; but its sheer prevalence makes it important to recognise. It is more often used with regard to the Labour Party than with regard to anywhere else, especially since 2015. The statement “I think that antisemitism in the Labour Party isn’t as great a problem as people make out” is perhaps not necessarily antisemitic. However, it is if the person refuses to take into account the views of Jewish organisations, as they frequently do, or listens only to a point of view that chimes with what he/she believes. It is not at all uncommon for a person who minimises antisemitism in the Labour Party to have more direct forms of antisemitism on their social media timeline, though that is far from always being the case. It is particularly offensive when a non-Jew tells a Jew who is concerned about left antisemitism this; members of ethnic minorities must be listened to with respect and understanding when they complain about incidences of racism.

You don’t have to be Jewish to be a victim of antisemitism; it isn’t that uncommon for non-Jews to be victimised because they have defended/supported Jewish people or through association.   https://www.facebook.com/socialistsagainstantisemitism/photos/a.284740342376964/506540560196940/?type=3&theater :

It is quite common, sadly, for those who defend and show solidarity towards Jewish people to be attacked in an antisemitic manner. Rosie Duffield MP is not Jewish but is particularly vocal in her denunciations of antisemitism and anti-Semites. Much of the abuse that she all too frequently receives is of an antisemitic nature, even though she herself is not Jewish.